Agriterra’s advocacy and lobby approach is based on the idea that effective lobbying results in a more favourable business environment for the members of cooperatives and farmer organisations. By using the Farmers Advocacy Consultation Tool (FACT) Agriterra introduces a structure that is designed to ensure effective lobbying. FACT is essentially a way for farmers’ organisations and their constituencies to relate to each other. It ensures that any policy proposal that the organisation prepares takes root in the reality, needs and concerns of members.

A 'FACT Lessons learnt workshop' took place in Kigali from 13-14th June 2019. The 15 participants had previously attended the FACT preparatory workshop as part of the FACT trajectory.

The aim of this workshop was to share experiences of how different organisations have implemented FACT concepts based on the action plans they developed to address certain issues.

All members shared positive testimonials of how FACT has improved their way of lobbying helped them to identify and engage different relevant stakeholders for addressing their issues. All attendees expressed the same conviction: “FACT has been a learning trajectory where we have gained new insights and we are delighted how we managed to find solutions to matters that we had taken forward”.

Participants didn’t know that after the FACT Lessons learnt workshop, they will deal with it again in the future, they learned, unlike other trainings, the issues to be addressed by FACT never end. There are always aspects of FACT that can be used for improving not only policy changes but also other direct businesses, such as investment and loan mobilisations, improve member commitments through consultations and member involvement and engagement.

This workshop was also a testimonial that FACT really works. Some organisations shared how FACT has yielded concrete results through engagement with apex organisations and government based on grassroots issues. Others shared how FACT equipped them with skills not only for lobbying for policy changes but also for negotiating well with investors.

The road map and take-home knowledge

Besides the experience- and lessons learnt-sharing, which was the most interesting part of the workshop, as facilitators, we supported the four participating organisations to draft a road map of how they will institutionalise the FACT methodology in their priority issues to lobby and advocate for.

The participants mainly take home the clear plans of what they are going to do next. Seeing FACT as continuous and cyclic trajectory improves their day-to-day lobby processes to take problems to the decision-makers and bring solutions to their members, whom they also consult and involve throughout the whole trajectory. Participants understood the need to put FACT in their budget planning so that some resources should be earmarked for lobby and advocacy trajectory using FACT methodology.

The future of FACT in Rwanda looks very promising. This is based on the results of the piloting of FACT concepts which were positive. It's also expected to scale the use of FACT methodology as all the participating organisations are eager to institutionalise this FACT tool as part of their daily lobby and advocacy work. All organisations involved expressed interest in the training of trainers so that they can extend their training to their members.

The workshop’s focus was on experience sharing but also on learning from each other about best practices and how each organisation can address future challenges. Most importantly, participating organisations developed a road map to institutionalise FACT methodology as part of their daily lobby and advocacy work within their respective organisations. Overall the workshop has been a success and met far beyond the participant's expectations.

Watch the movie from the workshop here: https://youtu.be/n9UAYIJOJm8 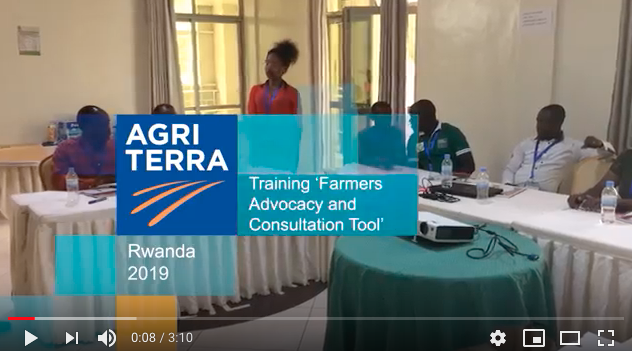 How much impact can FACT make?

According to Peter Ntaganda, when an organisation dares to start implementing the basic steps of the FACT methodology, FACT can have a great impact. Here below is an example shared by UCORIBU, a rice cooperative union and one of Agriterra clients in Rwanda.

UCORIBU had an issue on the unequal tax imposed to rice farmers in government mechanised marshland rented by farmers. The tax was being set by the district councils and would differ per district. It was about RWF 40,000 (approx. EUR 40) in one district, RWF 60,000 in another district or even up to 120,000 RWF in some other districts.

The Union was very much concerned by this inconsistent and high tax across three districts, where they operate in the Southern Province of Rwanda. After being trained on FACT methodology, UCORIBU has taken the issue up to Gisagara district officials where the union is headquartered and at the end, they were told that the issue is beyond the district scope of intervention. The union discussed this issue with the Rice Farmers’ Federation in Rwanda (FUCORIRWA) and agreed to take it at a higher level together. The Union mainly has been lobbying and advocating for its own members who are currently about 13,000, operating on 3,000 ha. However, the land tax issue was also the main nationwide concern for all farmers producing rice in government improved marshland which is estimated to 14,000 ha countrywide.

The Federation shared the problem to all ministries involved in rice value chain regulation including the Ministry of Agriculture and the Ministry of Trade and Commerce but without results. Later on, it was discussed in the National Government Retreat. The President of Rwanda who is also the chair of the retreat requested the Prime Minister to bring all the parties involved to find a solution to this issue with immediate effect.

A few days later, the Prime Minister set up a team to review what the laws and government instructions provide regarding the marshland taxation and found that there was an existing presidential order stipulating that such tax should not exceed Rwf 4,000/ha (about 4 EUR). This was taken as a decision to harmonise the marshland tax to Rwf 4,000 countrywide. The Prime Minister called on a meeting with all ministries concerned and other relevant parties including rice processors and rice farmers federation to communicate the decision and ask for immediate implementation of the resolution to the marshland tax problem. 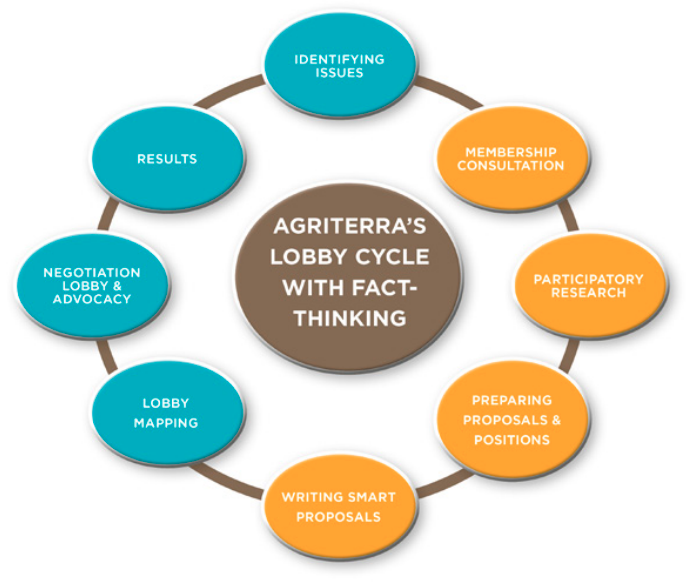 This story was shared by Mr Jerome Mbonirema the Union Manager as UCORIBU key achievement of their FACT implementation during the lessons learnt workshop. Proved to be a very interesting story that can show the power of FACT in improving the smallholder rice farmers income by saving on the cost of production. Niek Thijssen and Peter Ntaganda, the facilitators of the FACT lessons learnt workshop, were curious to know to what extent FUCORIRWA values the intervention of UCORIBU to have this issue addressed and how much their role should be quantified compared to other stakeholders involved.

Speaking with Mr Appolinaire Gahiza, the FUCORIRWA (Fédération des Unions des Coopératives Rizicoles au Rwanda) Board President, he confirmed the story as told by the Union and emphasised the role of the latter to bring this issue up and the way they were able to provide all the evidence confirming the seriousness of the problem. Mr Gahiza attributes the contribution of UCORIBU throughout the whole process to 60%. With this confirmation, we can now announce that Agriterra FACT approach has contributed to (784,000x60%) = EUR 470,400 savings for the rice farmers per year in Rwanda. #FACTpower!

Niek Thijssen works as a business advisor in Agriterra. His focus is on West, Central and East Africa and the Middle East. Further, he is specialised in land rights and fragile states.  Peter Ntaganda, business advisors in Agriterra, is based in Rwanda and his portfolio includes cooperatives and FOs in maize, cassava, horticulture, rice and coffee value chains.