A crop residue treatment training for farmers in Ethiopia has yielded fantastic results. Feeding cows a treated crop residue with effective microorganisms (EM) and molasses, a viscous substance resulting from refining sugarcane or sugar beets into sugar, increased the milk production on average by 1,8 lit per cow per day.

The cooperative union has been a client of Agriterra since 2018. Its main activity is marketing members’ produce and distributing agricultural inputs and consumer goods to the members and non-members. Currently, they are managing numerous projects, including a dairy farm that is supported under the Agriterra-SNV-BRIDGE project. The dairy farm covers 20 hectares of land and has a total of 576 crossbreed cows.

The union sells fresh milk to the community at a reasonable price and also supplies heifers to farmers at a lower cost than the market price. With these efforts, the union hopes to stabilise the surrounding milk market price while also playing an important role in breed improvement in its surrounding areas.

In 2021, we decided to work with the union board and management to find a solution to the farmers' feed cost problems. Agriterra identified a local consultant who could train farmers on possible technology, helpful to reduce the feed costs by utilising locally available alternative feeds and technologies. As a result, Agriterra hired a local consultant and introduced crop residue treatment with the use of molasses and effective microorganisms (EM). The technology was first tested at the union dairy farm by treating hey with EM and molasses, which produced excellent results, with milk production increasing by up to 3 lit per cow per day. 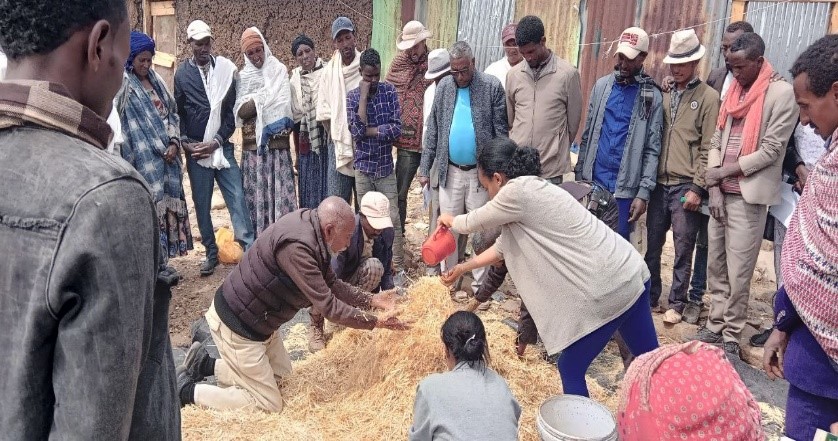 Later, 150 milk producing women member farmers received crop residue treatment training using molasses and EM. The trainees were asked to record the milk productivity per cow per day before and after feeding crop residual treated with molassess and EM.
In addition to the women farmers, some government extension workers (development agents) were trained with the aim to provide on-the-spot assistance/coaching support to the farmers after the training. Immediately following the training, development agents were assigned to respective trained farmers to provide door-to-door technical support on practical crop residue treatment preparation. The SNV-BRIDGE project provided each farmer with the necessary plastic drums, EM, and molasses for crop residual treatment. All trained farmers volunteered  to prepare crop residue treated feed.

The result has become impressive to the farmers and to the union. We are working to scale up the training to many farmers in 2022. By now, 575 milk producing farmers have expressed an interest in crop residue treatment training and have agreed to cover the cost of required materials/inputs such as plastic drums, EM, molasses, and other costs themselves. The SNV-BRIDGE project will cover the cost of the trainers only.