From farm to table

The union was established in May 2003 by 7 primary cooperatives, 1750 small holder member farmers and with the initial capital of 153, 000 Ethiopian Birr(ETB)( 1 Euro is equal to 32 ETB). Currently, cooperatives member raised to 119 and membership increased to 45,380 of which 12% are female members, with capital reaching 21.1 million ETB.

Before 2012, the union's activities were manly dominated by input marketing and not business oriented although the union has an enormous potential for the production and marketing of maize, chickpea, red kidney bean, coffee and Niger seed.

In 2012,  the collaboration with Agriterra begun and has been funding the capacity building (training) of farmers, extension workers, union board member and staffs of the union mainly works on oil seeds crops such as Niger seed and linseed areas. The Agriterra support was mainly focused on the following key areas:

Outcome of the Agriterra support

The productivity of oilseeds increased due to the training given to the farmers and all stakeholders and moreover, the union started to think about value addition. They developed a business plan to setup edible oil refinery, technical support for the business plan and possible financial sources, the accounting recording of the union changed from manual to Peachtree accounting software and the management of the union received training and exposure visits. In general, lots of improvements have been seen especially at the union level; the output marketing contribution of the union to the total turnover has been improved drastically, the union management and board capital strengthened, the farmers knowledge on good agronomic practice has been improved and above all the union business diversified and engaged in agro-processing activity.

Admass is a pioneer to applied approach and a successful union for Agriterra. As Admass is in a high potential area for Niger Seed and their ambition to engage in edible oil processing factory, Agriterra has played a pivotal role in making their dream become reality.

When the investment started  4 years ago, the union had bright ambitions and strong commitment, yet they lacked the required capital as is the reality for almost all unions in this country. But Agriterra advised and assisted the union to mobilise their own internal capital using their own members. Awareness creation workshops were organised at different levels. This idea of internal capital mobilisation was initially piloted at Admass with the support of Agriterra. The result was impressive; the members purchased new share both in kind and cash and the union able to mobilise 4 million ETB additional equity capital from its member. The pilot has become a success story and nowadays different cooperative unions are taking lesson from Admass, which brought remarkable results.

Agriterra considers Admass union as a pioneer union in terms of internal capitalisation in this country. Agriterra has assisted this union a lot especially internal capitalisation and provided a 5 million ETB cash guarantee through social investors. This year the union has successfully established a Niger Seed Edible Oil processing factory and the establishment of the factory has been inaugurated on September 18, 2017.

What holds the future?

Although the union is currently producing 3000 liter per day, the factory has a 5000 liter  production capacity per day. At present, the union has created employment opportunities to the local people, supplying a pure oil to member framers and to the society, and above all created sustainable market to the members oil seed crops.

Agriterra will continue working with the union for only one more year and the focus areas will be improving the management effectiveness Niger seed factor workers and acquainting the union marketing staffs about proper branding and marketing strategies. 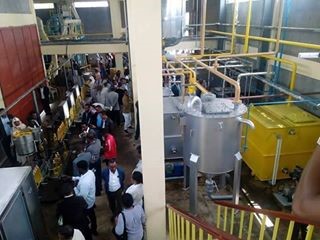