The birth of a co-packing idea

Baringo county, the home of BAMSCOS Union, was among the least directly affected counties in Kenya of Covid-19, in terms of infection rate. The first case was officially reported in the county on  27 July 2020 and since 10 October the case load stands at 56 infections and no fatalities reported.

Just like all other Kenyans and citizens around the world, BAMSCOS was struck with panic when the first case was reported in the country. More uncertainty ensued when the government started enforcing stringent measures to combat the spread of the disease. Few knew how to respond to the new reality of carrying out cooperative business. Therefore, the cooperative devised different ways of serving their members remotely, including the use of mobile phones, messages, apps, and many other teleconferencing tools. The same was applicable to their clients, who off-take their members’ milk. The new pandemic meant that BAMCOS could not meet with the milk buyers (processors) to discuss the prices, as they normally would.

At consumer level, the pandemic brought about panic buying, as people wanted to buy as much as they could store for their families. Therefore business went well for the dairy processors, who could produce long life UHT and ESL milk that could be stored without refrigeration. Due to this high demand, the prices remained high and profitable for the milk processors, but remained largely the same for the raw milk producers, like BAMSCOS’ members. This trend continued for quite some weeks until the president of the republic of Kenya lifted the intercounty travelling between Nairobi, Mombasa, and the other counties for people to move freely within the stipulated time.

This allowance to travel to and from Nairobi allowed BAMSCOS to swing into action and look for a good price for their members’ produce. They set monthly prices for their raw milk. Every 26th day of the month they invite all the milk processors to their Eldama Ravine offices to settle on the price with which they will buy their raw milk in the following month. The highest bidder will be allocated the milk for that  month.

It is important to point out that during this pandemic, raw milk production went down by  50% on average throughout the country, as per the Kenya Dairy board’s statistics. This  meant that clients like BAMSCOS, bulking an average of 40,000 litres a day were, and still are, an attractive prospect for many processors. Therefore, every 26th day of the month, many processors gathered in their offices. This practice has helped push the raw milk price by more than 50% (from Ksh 30 in March 2020 to Ksh 45 per litre of milk in October 2020).

On 26 July 2020, during the interview with one of the processors (Uplands Premium Dairies and Foods ltd) who had be chosen to buy part of the milk for the month of August 2020, it was agreed that BAMSCOS was invited to visit their processing factory in Limuru. It was during this visit at the factory tour that one of the board members remarked:, “why can’t we enter into a Co-packing arrangement with this processing company, as we sell part of our raw milk to them?”. This remark emanated from his observation of the huge idle capacity the factory had and the quality of their processing equipment, which is modern and could do the packaging of, the now in demand, long life milk. 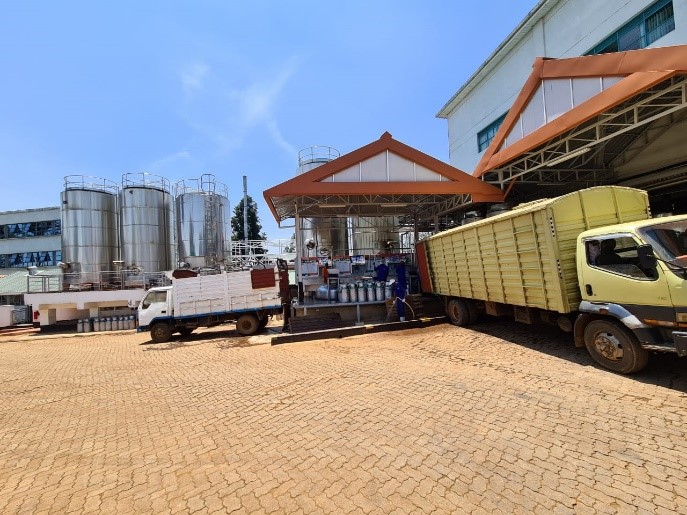 As BAMSCOS representatives went back to Baringo, they pondered on this great idea from one of their own and sought the advice of their development partner Agriterra. After extensive consultations, both parties agreed to first make a detailed co-packing business plan to establish whether the idea was bankable and to expand the list of dairy processors BAMSCOS could work with. This was done immediately and the business plan, drawn up by different participants, gave more insight and what course of action to be taken.
Subsequently, a study tour was organised to visit other potential dairy processors to explore the capacities of their processing plants and to discuss possibilities for partnering on this venture, among other key things. On this study tour Kabianga Dairy, Highland creamers and foods, Uplands Premium Dairies and Kiambaa Dairy were visited.

This idea has, in the words of BAMSCOS, ‘left the train station’. Possible brand names have already been selected and agreed upon and they are already undergoing the process of registration. Members have ratified this great idea and given the board a green light to proceed and they further agreed to deduct 50cts per litre of milk they supply to the cooperative as capital (translating to approximately Ksh 600K (€6K) a month). This gives BAMSCOS a chance to get a loan that can be repaid using this money, without it affecting their cashflow.

Having completed the tours, Uplands Dairies was the most viable option for the Co-packing partnership, as they presented a strong case for a fruitful collaborative partnership with BAMSCOS. Therefore, in the next few months, the cooperative processed milk products from Baringo will be hitting the stores in the target market areas.