Can a partnership work in Uganda?

Marije Klever is 35 years old and portfolio holder for dairy farming at the NAJK (Dutch Association for Young Farmers). Five years ago, she took over her parents’ dairy farm in De Meern. Evert Jan Wijers (66 years old) is a dairy farmer in Voorst. He runs his business together with his wife and two sons, who he will hand it over to in the near future. In March, Klever and Wijers visited Uganda on behalf of Agriterra to share information on how farm succession work in the Netherlands.

Klever and Wijers at Tayebwa Emmanuel’s farm, who took over the business from his father

The Ugandan National Young Farmers Association (UNYFA) had organised a 3-day workshop. The theme of the workshop was ‘the continuity of the farming business’, and Klever and Wijers were invited to shed light on the ‘farm succession’ segment. Klever: “We were able to offer a look at both sides, and guide the participants through the process needed to achieve a successful succession by the next generation.”
The workshop was well-organised, according to Wijers. "About twenty participants were invited, including directors from UNYFA and other organisations. The level was high. The participants were knowledgeable and had a lot of basic knowledge about both agriculture and governance.”

Working together in a partnership

Klever and Wijers emphasised that the process of a farm succession in the Netherlands takes years, with those taking over involved in all developments from an early stage. Wijers: “A common and major problem in Uganda is that the father is the boss of the farm and has all the control, until he dies. Then there is infighting among the children about the division and the farm is divided into smaller pieces of land. This can be prevented by having successors already join in the work through a partnership system. It means they become involved, get a say, and in the event of a succession it is much easier if they have already invested money in the company."
Klever adds: "For the average farmer in Uganda, it will be a huge step to share control with his children. Their mindset has to change. But the directors were open to new ideas. I really hope they can roll out the partnership concept in the country so that farms can continue to exist from one generation to the next."

The duo also talked about possible situation that may arise, for example: how do you deal with children who are not interested in taking over the business, but are entitled to their share of the inheritance? As children, how do you have this conversation with your parents? How do you make a plan together and enter into a partnership? "We discussed the concept of 'partnership' at length," says Klever. “Of course, there are big differences with the Netherlands, such as the size of the families, and the method of land registration. What’s more, farm businesses are often a status symbol over there, while in the Netherlands people see a farm more as a business and earning model. But our story is mainly meant to inspire. We hope we have given them a nudge to think about the possibilities, and that they map out the business revenue model, for example." The participants were given the follow-up task of writing a business plan.

The workshop was not just about farm successions, but also about the economic insight into the business. Is it profitable? What about the costs and depreciation? How are registration and taxes arranged, etcetera. Klever and Wijers also shared their ideas and knowledge of these subjects too. The position of women was also discussed. Klever: "At present, women have little say in farming. Which is a shame, so we have urged that the potential of women should be used more, and that they should have a greater say.”

Both Klever and Wijers were surprised that Uganda was so well-developed. “We were in a prosperous area, and the farmers there had fairly large farms with many employees. However, their children were not interested in taking over the farms, as the father remains in charge. So they went off to study and then find other work. This is not good for the future of agriculture, of course. The image of the farmer also has to improve. The countryside should be a nice place to be, not the place where you get left behind if you don’t make progress in your life.” 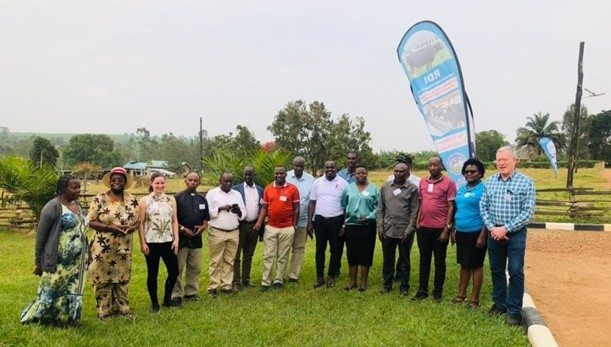 Potential for the future

Winnie Ashaba, Agriterra’s business advisor in Uganda, believes that involving the two Dutch Agripoolers added value to the workshop programme. “By sharing their experience, they allayed the participants’ fears about the feasibility of of farm successions. It was an eye-opener for the farmers to hear that the process of a farm succession.can take up to 10 or 15 years, during which time the family works closely together and communicates to tackle any differences of opinion. What’s more, we all came to the conclusion that it is advisable for successors to complete an agricultural course. Proper business registration and developing a strategic plan are essential too. Finally, it is important that the business is profitable, to encourages the successor to continue with it.”

Fortunately, Klever and Wijers definitely see potential for the young farmers in Uganda and they hope that UNYFA can continue to support and inspire them. The workshop was definitely a first step in the right direction. The next step for the UNYFA is to organise meetings for young farmers in the region.