What is the connection between Yvon Jaspers, the well-known presenter of ‘Boer zoekt vrouw’ and Agriterra? And why was she in Rwanda in February last year? This has to do with the Nuffield Farming Scholarship, a scholarship for agricultural high-potentials, which she received in 2018.

The Nuffield Farming Scholarship is a global award given to farmers who possess qualities to become frontrunners in their sector. Even though she has a definite connection to agricultural life, Jaspers is not a farmer herself.
“Nuffield has existed in the Netherlands for 7 years. I am the first non-farmer ever to receive the award. That is rather exceptional. I wanted to travel the world looking for people who, like me, try to communicate the agricultural story to the masses. We do so via ‘Boer zoekt vrouw’, but that programme isn't about the farmer life. That's why we developed the programme ‘Onze boerderij’ to accompany it,” Jaspers explains. “I've noticed a divide between farmers and civilians. Many people try to address the issue of how we can involve the average citizen in what is happening in the farming world. I thought: who in the world has successfully done this? That was the topic of my study.”

The scholarship opened many doors to her. “There is a worldwide network of thousands of farmers who had that ‘scholarship’ at some point in time, and that's fantastic. The scholarship enriches your world. You learn from each other, people meet and sometimes this leads to friendships for life.” Jaspers travelled to, among others, America, Africa, England and China. She was a guest at BBC and on Chinese television and visited agricultural theme parks and fairs in America.

“I think the work Agriterra does is amazing!”

She is very happy with the chances she has been given. “I get to go everywhere. Every day, I can follow my curiosity. I have spoken to radio and television broadcasters, journalists, but also farmers all over the world to see how they tell the agricultural story. That showed me that the road we are on is a special and important road. I sometimes say: let's turn the Nederlandse Publieke Omroep (Dutch Foundation for Public Broadcasting) into the Agrarische Publieke Omroep (Agricultural Foundation for Public Broadcasting). That’s a joke, of course, but I'm happy that public broadcasting has room for these great farmer's stories, because this is important to all of us.” 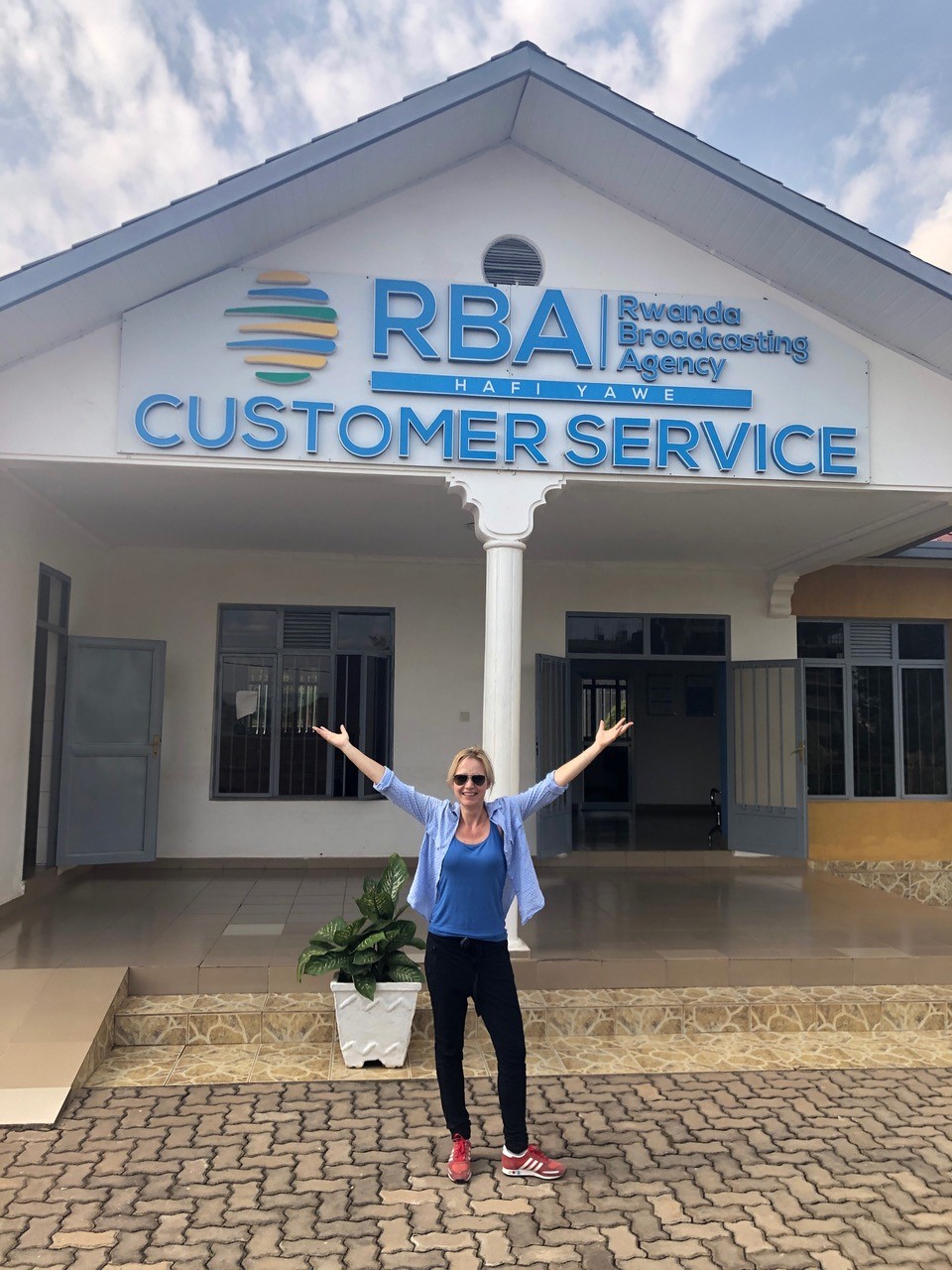 On the road with Agriterra

Jaspers encountered the work of Agriterra in Rwanda. “I went to Rwanda because my husband had to be there for a project in the Virunga National Park. I absolutely love Africa, and I thought it would be great to combine my journey with my assignment. Someone tipped me about Agriterra and I contacted them. I asked if I could join the team in Rwanda for a day. In the end, a day became three days. I could ask them anything and could accompany them everywhere. That was amazing!” Jaspers visited, among others, a corn cooperative, a horticulture cooperative, a potato farmer cooperative and a Dutch crisps manufacturer.

“I think the work Agriterra does is amazing!” she says, full of enthusiasm. “It's very noble that the farmers of the Netherlands unite to help farmers elsewhere. And not just by transferring money, but by actually offering knowledge. In addition, a lot of knowledge comes back the other way. I think a journey like this is enriching for any farmer. It's always a good idea to look beyond your own borders. Looking at your own company with a helicopter view can be incredibly illuminating, inspiring and can put things into perspective. An exchange like this is a great benefit for both parties.” Jaspers thought the farmers in Rwanda were energetic, enthusiastic and very eager for new information. She noted that there were only a few young farmers, and this worries her.

“I'd love to do something with connecting farmers all over the globe.”

“Farmers are only getting older, and it's the same over there. At a cooperative with 700 members, the average age was above 65. That is concerning. The younger generation moves to the city, since it's easier to make money there. But a farmer must be patient. You cannot reap the profits tomorrow if you plant your corn today. The same goes for the Netherlands. We need to cherish and help our young farmers.”

Jaspers discovered more similarities between the Netherlands and Rwanda, such as the issues surrounding pesticides. What should you use? What is good for the earth? Moreover, the relationship between farmer and nature here is often turbulent, and there is a divide between people in the city who don't know where their food comes from, and the farmers.

“Rwanda is a very small and highly populous country. The city is only an hour's drive away from the countryside. But the people in the city are far richer and more cosmopolitan than those living in the countryside. That difference is far greater than it is for us, but questions like ‘where does your food come from?’ and ‘how do we produce less waste?’ are issues there, too.”

Jaspers is thinking about a new television format. “I'd love to do something with the idea of Nuffield and Agriterra, connecting farmers all over the globe.” For that to become a reality, the farmers in the Netherlands should first unite, and that is why Jaspers calls upon them. “It sometimes seems like farmers are each other's competitors. Each farmer runs their business in their own way. That is great, of course. It is very healthy to look beyond the limits of your own grounds, but make sure to do what suits you and unite with others.Don't become each other's enemy. Don't let the farmer's collective split up, and don't take opposite sides. The organic sector should not oppose the conventional sector, nor should the pig farmer oppose the goat farmer. We cannot afford this in this time of change, so: stand together!”